Thank you for your patience while we retrieve your images.

May 10, 2019 was the 150th anniversary of the completion of the transcontinental railroad and driving of the golden spike at Promontory UT. On May 9th the Union Pacific RR held a Golden Spike ceremony in Ogden UT near the Ogden RR station. The U.P. Big Boy 4014 and the U.P. 844 were the stars of the show. The Big Boy had just completed a multi-year rail up rebuild at Cheyenne WY and steamed up and traveled to Ogden for the ceremony. It was the first time it steamed up and traveled the main line in 60 years. The first batch of photos (1-26) record the event. I did not attend the Golden Spike ceremony in Promontory on the 10th as the crowds were predicted to be overwhelming and in fact were reported to be exactly that.

The following day the Big Boy shoved its train into the Ogden depot and the second batch of photos (27-51) record this event.

Photos 52-58 are shots I took in the depot area and from the Front Runner commuter train.

Photos 59-95 record my trip on the Front Runner commuter train from Ogden to Provo UT and return.

Photos 96-112 are shots taken while walking around Ogden. 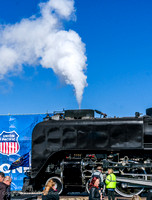 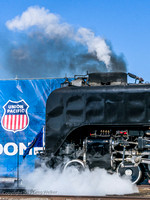 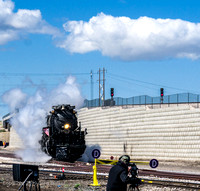 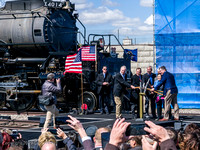